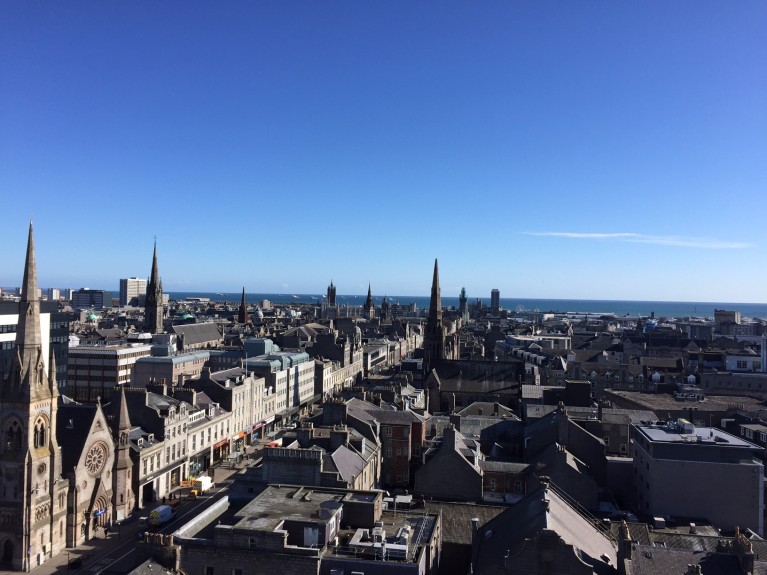 Making his mark on the city!

Philip Lumsden, 39, is on the cusp of making his mark on history – managing the landmark development of The Capitol in the heart of Aberdeen city centre.

When he started his career as a quantity surveyor 25 years ago, (or indeed while he sipped a pint in the then-Oscars in his teenage years) he didn’t imagine he would be working in his current role.

In 2013, Knight Property Group received the go ahead for the £35million development, which, on completion, will see the building restored, renovated and extended to create prime office space covering approximately 75,000 square feet. It is the most prominent and one of the most complex and challenging projects undertaken by the company, and by Philip to date. Philip, who grew up in Bridge of Don, took his first step on the property career ladder when on leaving Oldmachar Academy, he was employed as a quantity surveyor for Barratt Homes  –  a job he was keen to get because of the “good prospects”.

After six years, he moved to the Stewart Milne Group and latterly, James Blake Ltd before being employed as a project manager at Space Solutions. Philip’s role steadily evolved and he was offered a position at Knight Property Group as the company’s first project
manager.

In this role, Philip managed the building and development of commercial space for a number of oil and gas operators and service companies. He worked closely with his team to meet the requirements of bespoke builds, including underfloor car park heating, testing pools and elite training facilities.

Philip progressed steadily to become head of construction in 2013, where he now heads up the company’s project managers and deals with the commercial side of the business including planning, warrants and contracts.

Philip said his involvement with The Capitol, and the entire process is a “labour of love”. He recalls walking into the building for the first time since it changed ownership.

He said: “The former Oscar’s bar was used as a store for the former Jumping Jacks and Chicago Rock, it had been stripped of anything valuable or movable and everything else had been left behind in disarray. There were fridges and built-in furniture in the rooms and bottles, drink dispensers, glasses and flyers everywhere – time had stood still.”

Philip admitted he felt the enormity of the task the company had undertaken.

“The building was in such a state of disrepair, it just wasn’t fit for use,” he said.

“Thinking about the project we had undertaken – turning the building into an office complex  –  was very daunting.”

However, the opportunity to breathe new life into the city centre, to be part of the development and The Capitol’s history, was his motivation to lead the project.

Work on the building first commenced in October 2013, when a team of specialists began removing the original Compton Organ, piece by piece.

The removal process took four months of planning and five weeks of work onsite. The organ was donated by Knight Property Group to the Aberdeen Theatre Organ Trust, which they worked closely with throughout the process. The organ and its components are currently being stored in specially made crates and units before it will be displayed at a yet-to-be-decided Aberdeen location.

Work on the original plaster features also began at the same time, an internal soft strip followed before the demolition and main works commenced in June last year.

Philip visits the site every day, where he is responsible for commercial and construction work, managing the design team, consultants, engineers and architects. He claims to run a “tight ship” to ensure the team work on time, (the building is on track for end of 2015 completion date) and meet budgets, while ensuring the highest quality.

Working on a listed building throws up many challenges, and by working closely with Historic Scotland and Aberdeen City Council Conservation Department, a fine balance has been assented to ensure the building stays true to its roots while meeting the requirements of a much needed a state-of-the-art commercial offering.

“As the front of house hadn’t been used since the bar closed, the building dramatically suffered through lack of maintenance,” Philip explained.

“It was effectively in a state of disrepair, dry and wet rot was evident throughout and woodworm was also present. It’s not until you strip back you fully uncover and understand the extent of the work required. For months, something new was discovered on a regular basis, which required further investigation and a solution (usually intensive refurbishment)  –  dealing with this, while maintaining timescales was challenging.” Huge amounts of work have been carried out to ensure the building retains a number of its original features, including its art deco front of house, the clocks (which are being restored by a local jeweller) and the frontage of the building  –  the former canopy, signage and stonework are also being carefully restored.

Philip added: “‘The frontage of the building is an Aberdeen landmark, it deserves to be fully restored and enhanced, it’s in keeping with Union Street, the era, and it’s the gateway to the new premises.

“Due to its city centre location, the project has many logistical challenges, there isn’t ground around to set up site as per most developments of this scale, or space for manoeuvring equipment.”

He said that while each work package has its own significant challenges, one of the main challenges that demonstrates the significant evolution of the building is the removal of the existing staircases and the structural alterations required to incorporate the two escalators, which were installed last month.

Philip’s dedication to his role, the industry and his wealth of experience has brought him to this point in his career. And it’s certainly paid off –  not many are leaving their mark on their city quite like Philip.